Did you know that Story ad formats are one of the fastest-growing ad inventory placements on Facebook and Instagram? So if you’re not maximising these placements now, it’s time to get good at them. Today, we’ll cover what makes an Instagram Story ad works and what makes them fail. We’ll also talk you through some of the differences between Story ads and feed ads, and share tips for designing Stories ads that perform well. And make sure you stick around till the end, where we will talk about the three most common mistakes brands make!

Where to Find Stories Ads in Ads Manager

So the first thing that’s important to know is where you even pick story ads as placement. We’re pretty much gonna manage all of it through the ads manager. So let’s have a look. 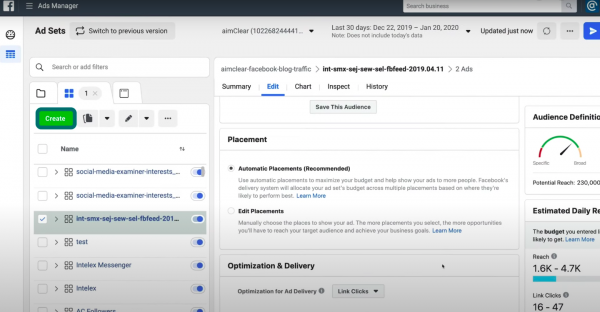 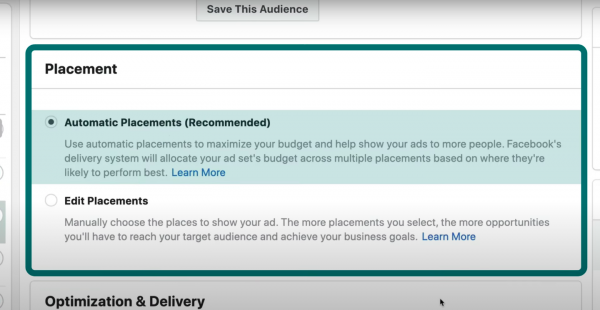 When you create a new ad set, it is going to automatically pick all of the placements that Facebook has. This is a good thing and a bad thing. 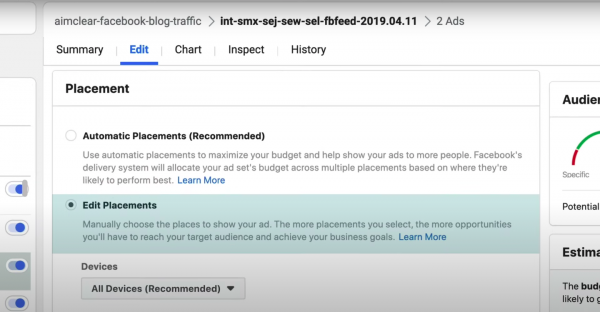 So let’s go into edit placements and take a look a little more closely at where these ad placements are. 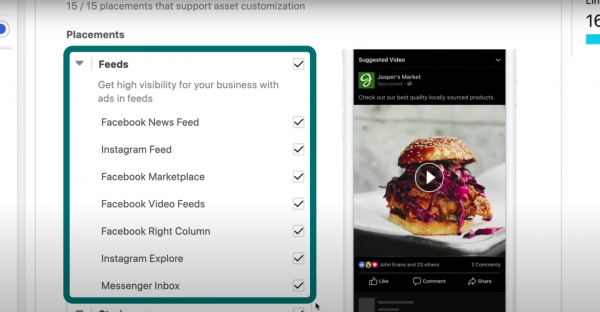 So the first group are feeds, which is probably what you’re used to using. That’s what traditionally we’ve run on Facebook and Instagram. 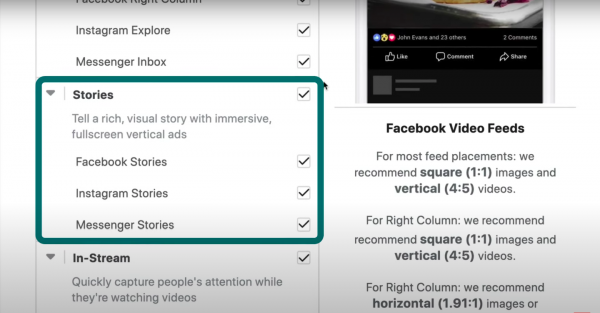 If you scroll down, this is where you’re gonna see that stories are. So you can choose to run stories in all available story placements, which are Facebook, Instagram and Messenger. We’re just talking about Instagram today.

Why You Should Not Bundle Placements Together

Note: Bad things happen when you bundle all these placements together when it comes to your creative! What Facebook is gonna do is take the creative you made and just make it an Instagram story ad. The results are usually not fabulous. Let’s take a look at what happens when it does that. 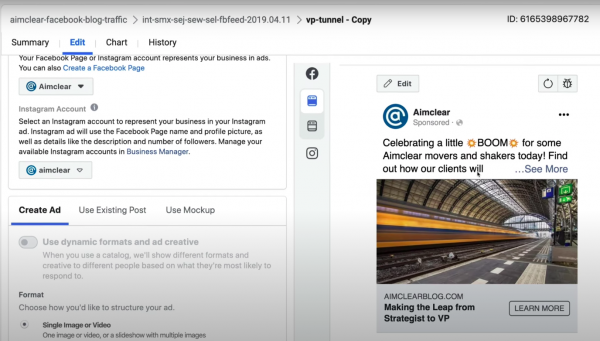 When you go into your ad creative, it’s going to display a preview for you. It defaults to the Facebook feed so everything looks nice, everything looks clean, it’s centred perfectly, it all looks wonderful. But, here’s where you have to look at things a little more critically. 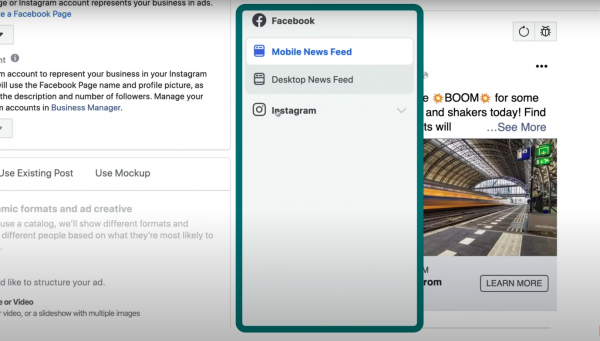 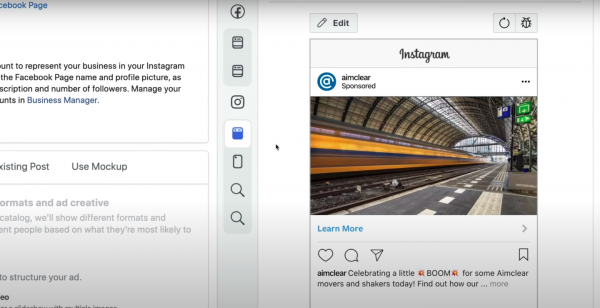 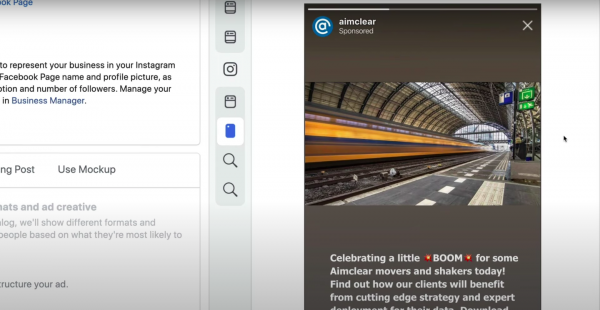 But, if you click on Instagram stories, it butchers your creative. So it doesn’t use the entire screen, it still squishes this down, and now you have all of this real estate at the bottom. And what it’s doing is it’s taking that wonderful ad copy that you made and it’s shoving it down here into a kind of ugly background with a standard font and it cuts it off. It’s definitely not an optimal user-experience. And it’s certainly not an optimal representation of your brand.

Stories are a full-screen experience. So when a user’s looking at it, that’s all they see. There’s very little distraction. But in a feed, they can scroll and look at the cat meme above it. What that means for your story creative, is it needs to be pretty captivating. Stories will automatically cycle through if you do nothing, versus a feed which doesn’t move. So stories are very fast-paced, and you need to keep that in mind when you’re making your creative. 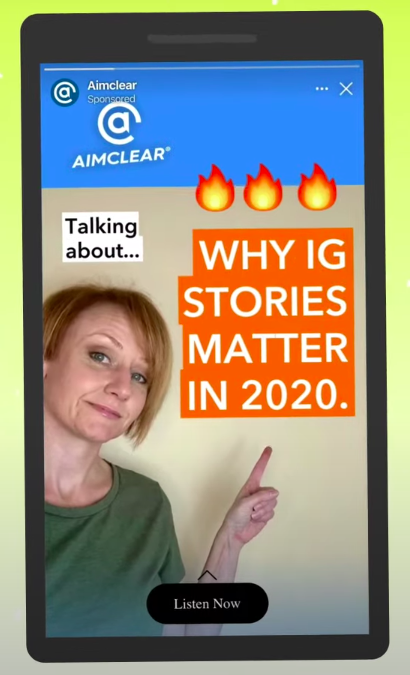 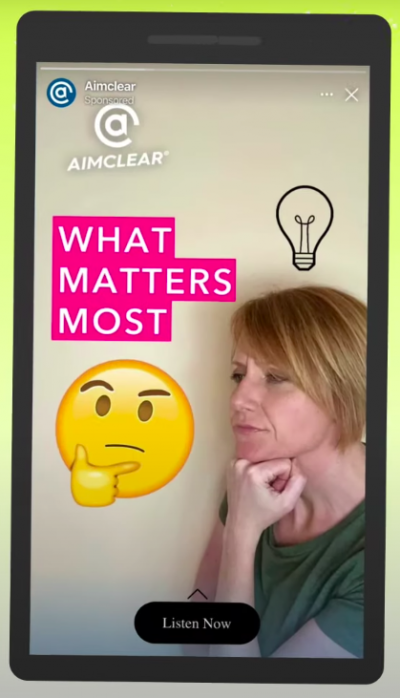 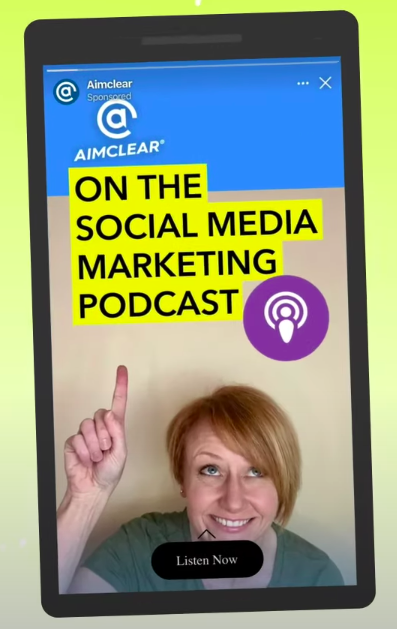 So this was created specifically to be an Instagram Story ad and still images were used here. While video is something you definitely want to focus on when it comes to Instagram Stories, this is an example to show that it doesn’t have to be overly complicated. There are also a couple things that were done right with this ad that we want to point out.

The first is using all of the real estate. Unlike the example we looked at before where there’s blocks of ugly colour and awkward text, this was done knowing that we don’t have body text. So we have to tell the story in the text that’s on the video. There’s bright colours and native tools so that it looks natural.

Ever gone through Stories seeing the grainy, more amateur-looking stories and then all of a sudden there’s a beautifully gorgeous image with high-quality graphics? While it might look really good in theory, it sticks out like a sore thumb in the Stories feed. It’s very obviously an ad. So a lot of times users are just gonna discount it and immediately lose interest. One of the things that was done here was to make it feel like it’s supposed to be a part of the stories. So when we’re talking about Instagram story creative, there are a couple rules to keep in mind.

Things to Keep in Mind About Instagram Story Ads

The first is, that pesky little 20 percent rule about text that they have in Facebook ads does not apply to Instagram stories. So you can load up that text in there. Keep in mind that it’s moving pretty quickly for people. But you’re not gonna want it move so fast they can’t read it and you don’t want to use a font that’s so small that they can’t see it. When you tell the story using text, do it minimally so that what is there makes the greatest amount of impact and people actually have the time to read it.

With story creative, it’s only 15 seconds long. And a lot of us are preconditioned to the classic way of storytelling which is there’s a nice big intro wind-up, there’s the crescendo in the middle, and there’s the pay-off at the end. Social creative is actually the opposite. What you wanna do is show the hook first. You have to show the why or why they should care.

Make Your Stories Look As Native As Possible

The more native you can make your video look to Instagram stories, the better off it’s gonna perform even if they aren’t necessarily the graphics and things that you would choose as a brand. So as promised, now that we know how and when Instagram story ads work, let’s talk about when they don’t.

Be Conscious of Your Medium

Again, Instagram Stories are very different than ads. They move quickly and they have to look like they belong there. They can’t look like a commercial that just sticks out.

Don’t Use the Same Creative

The second, is that because these things are very different, their creative is very different. It’s a full-screen experience in stories so lot of times when they’re struggling, it’s because they’re not using that full-screen. It’s doing that weird thing where it mashes-up this little itty bitty creative with really awkward text that gets cut-off. Those are the things you want to avoid. Make your creative for the placement that you’re using.

And third, Facebook doesn’t necessarily always do the best job at allocating your spend and your money. They will tell you that they do but stories are a little tricky for them because it’s not the largest part of their inventory. There’s really a case to be made to break-out stories into its own ad set where it’s not bundled. And this really does two things. It gives you maximum control over how your budget’s allocated. So if it’s doing well, you can just shove all that money into that placement and maximise it. And then if it’s not doing well, if might help you fine-tune it a little bit more. It gives you a little bit more flexibility than just auto-applying everything for all placements to the stories’ ad if you see that it behaves differently. So that’s another opportunity that we really frequently see brands not take advantage of but you should definitely look into.

DON’T MISS OUT!
Do You Want More Conversions?
Learn Digital Marketing the effective way. Get exclusive tips and strategies sent directly to your email.
Give it a try, you can unsubscribe anytime.

Powered by Convert Plus
Go to Top