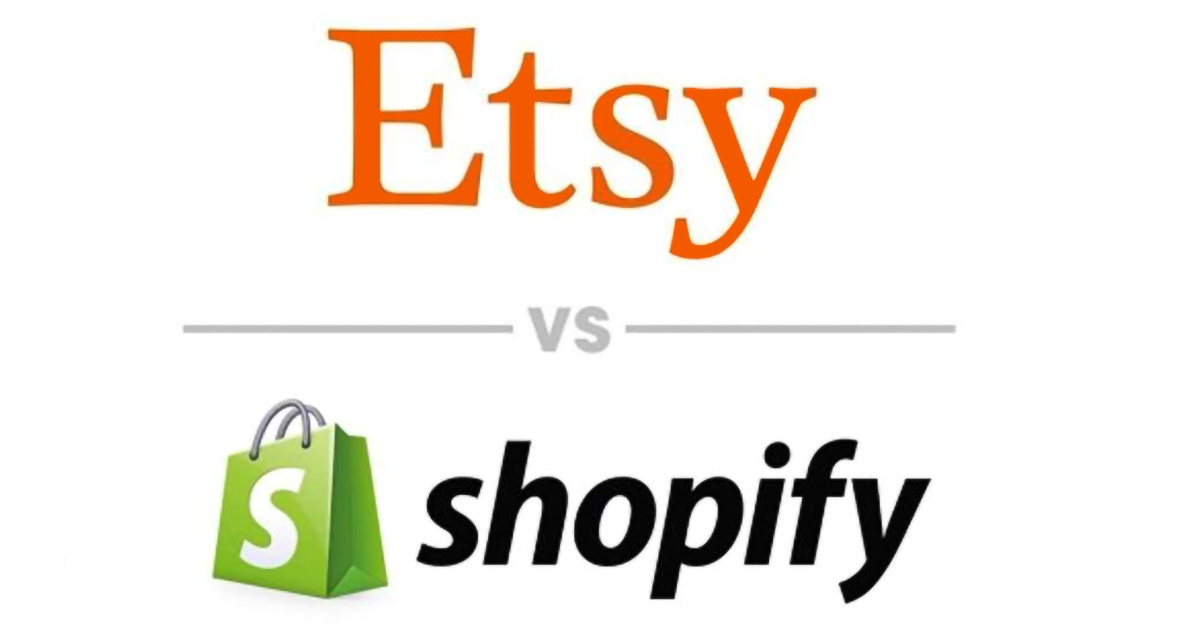 Shopify and Etsy are both popular e-commerce platforms for selling online. Depending on your business requirements one may be more suited for you than the other. In this article, we’ll discuss the difference between Shopify and Etsy, so you can decide which one would work better for you.

The biggest advantage of being a part of an online marketplace is that there are tons of visitors within the ecosystem. According to SimilarWeb, Etsy has a monthly traffic of over 300 mil sessions, and majority of the visitors comes from the United States, United Kingdom, Canada and other developed countries. (i.e. countries where the people have spending power).

On the other hand, setting up a store with Shopify basically means you’re all alone. You won’t have the luxury of being a part of an online marketplace, benefiting from the millions of visitors. You’ll need to spend money and effort to bring visitors to your Shopify store.

Just to be clear though, setting up a store on Etsy doesn’t guarantee you visitors either. You’ll still have to compete with the thousands of other sellers within Etsy, but it would be substantially easier as compared to Shopify. Generally if you take the right steps to setup your store on Etsy, you should see some visitors coming in within 24 hours. Unlike Shopify where you’ll need to depend on Google to crawl your store before you get some visibility in the search engine.

A disadvantage of being a part of an online marketplace like Etsy would be that its difficult to retain potential customers. When someone is browsing items on your store, Etsy would display items from other stores as recommendations to the potential customer. With more distractions, the drop off rate would be higher. This can also be a good thing because your items would in turn be recommended on other store as well.

Shopify is a clear winner in this category. Running your own individual store means you have full control in almost every aspect of the business. For starters Shopify is extremely customisable.  There are free themes that you can make use of on Shopify to design your online store, and thousands of paid options if you prefer to go for something more fanciful. Every single store running on Shopify can be entirely different.

In addition to the store design, Shopify is also very feature rich. You can fully integrate your store with Google Analytics, and place advertising tags such as Facebook pixels to for retargeting or building custom audiences. There are also thousands of 3rd party apps that you can integrate with to further customise your store. For example you can easily run a dropshipping business  with Shopify and a 3rd party app called Oberlo. In the case of Shopify, the sky’s the limit when it comes to customisation.

Etsy on the other hand is pretty much templated. Every store on Etsy looks the same, as there are very limited things you can customise to make your store different from someone else’s store on Etsy. There is a premium option called Etsy Plus which costs $10 a month and give you more options to customise your store. But it’s still a far cry as compared to what Shopify has to offer. You can’t fully integrate Google Analytics with Etsy so you’ll only be able to see limited data. There’s also limited options when it comes to adding advertising tags to your Etsy store.

Its not entirely a bad thing though. As things are more straightforward on Etsy it would take you a fraction of the time to setup a store, as compared to Shopify. Even as someone new to e-commerce, you’d probably be able to start running the store within 1 – 2 hours. Setting up a store on Shopify could take much more time as there are many more things to consider, with more options to customise.

Advertising Options On Etsy and Shopify

Etsy gives sellers a couple of advertising options, though this isn’t entirely necessary, as you can also leverage on the organic traffic within the Etsy marketplace. There are 2 ways you can advertise on Etsy.

Shopify doesn’t have any default advertising options per say. You’ll have full control to run your own ads on Google, Facebook, or any ad platform to drive traffic to your Shopify store. Everything is fully customisable so you’ll be able to do re-marketing, test and learn with different images, target different audiences, etc. It’s definitely a plus if you’re a savvy digital marketer. However if you’re someone just starting out, then Etsy may be a better option.

The cost to setup a store on Shopify vs Etsy is also quite different.

Shopify charges a monthly subscription with plans starting from $29 onwards. In addition to this there is a 2% fee for each transaction, and various cost should you decide to integrate with 3rd party apps for more features.

Etsy on the other hand doesn’t have a monthly subscription. Instead Etsy charges a listing fee of $0.20 per item for 4 months, or till it’s sold out. Whichever comes first. You can list each item with multiple quantities, and it would still be $0.20. For example if you’re selling 1 item but with quantity of 10 in stock, it would be $0.20. If you have 10 different items listed on your Etsy store, then it would be $0.20 x 10 = $2

Etsy also charges a transaction fee of 3% for each order, and there are premium plans such as Etsy Plus should you require.

Should You Sell On Shopify Or Etsy?

As what we’ve discussed so far each option definitely has their pros and cons. Broadly speaking if you’re someone new into the e-commerce scene with little or no digital marketing knowledge then Etsy would be the definite choice. However if you’re someone who is really savvy with digital marketing and have plans to build a brand in the long term, then Shopify would be right for you.

However you may also want to consider both options. Etsy having its own ecosystem of over 300 million visitors each month shouldn’t be neglected. Just by setting up a store and listing your items without any marketing dollars spend may earn you some sales. In my opinion any online seller should consider to have presence on both platforms. If you’re an individual and you feel its too time consuming to manage 2 stores, my suggestion would be to start with Etsy, regardless whether or not you’re new to the e-commerce scene.

Grow your customer base on Etsy, and when you have enough experience and revenue, then consider branching out to Shopify. By then your Etsy store should be on autopilot mode, so you can spend your time focusing on building your store on Shopify.

What do you think? Do you have an online store already? I’d love to hear from you.